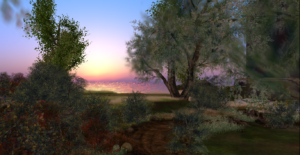 Today, we’re introducing a fourth category, virtual photography, because “screenshots” didn’t quite meet the needs of this creative and growing community.

Personally, I am insulted by what Leticia Roncero wrote on the Flickr Blog in regards to the new category (Virtual Photography) that Flickr has set for people uploading images from virtual gaming and virtual worlds. The fact of the matter is in most virtual worlds the only way to produce virtual photography within a virtual environment is to “screenshot” the image. Also a digital camera is a peripheral computer input device. I am not understanding the distinction that Flickr has made between a virtual photograph and a screenshot, they are essentially the same.

As a virtual photographer who has supported Flickr through a Pro subscription in my first and second life off and on for the past 16 years. Let me first say I fell in love with photography outside of my virtual life. I own a digital camera and took several drawing, painting and photography classes in college so in which I consider myself to be a learned amateur artist/photographer. I take pictures of everything, and everyone in my first life and second and enjoy it immensely. However, let it be known that actually photography itself is not a favored child of the art world.

Is photography an art form?

I believe that collectively Flickr and Leticia Roncero are not aware that most critics in the art world do not consider photography to be a legitimate art form.

Most photographers use digital cameras which captures images and stores them on SD cards which are computer memory cards. Nowadays, film photography is a hobby not a profession anymore. All digital cameras are peripheral input devices for computers they are not stand-alone equipment. The majority of modern photography produces a “screenshot” of one sort or another.

As digital cameras and computer captures images. In a similar way, a painter produces an image using non-technology tools and supplies such as paint, brushes and canvas. However, it is not the tool(s) that determine whether a creative endeavor is art.

We all know that in our modern culture, art has value. The value of an art is generally determined by a select group of individuals who support it and curate its economy. The artistic value of an art, is the value of an art as art. This value can be monetary, an emotional response, its capacity to be owned, its aesthetics, fame of the artist, sentimental value and such. One major stance to support that photography has no value because it basically captures reality and is just a facsimile of life, a bad carbon copy rather than creating a subjective reality.

Comparatively, here is a photograph of plate with lemons.

The above photograph is basic to what we all would agree is a plate with lemons. A carbon copy of what we encounter in reality without form or function, the subject is lemons. The painting by Van Gogh of lemons we are not concerned that there are lemons like what we encounter in reality in fact his painting is representative of Van Gogh’s representation of lemons. We are impressed by the mood in the paint strokes the color choices, even the symmetry and the ideas it imparts. We search for meaning in the art style used the method and type of paint used. A painting is art because of the representation it communicates. Art captures creativity and imagination, photographs identify just the facts of the subject. Therefore, photography is actual. Art paintings are ideal.

Ideal photography is when the photograph itself is not the subject but the things that are photographed which communicate ideas through the image. I believe virtual photograph is ideal photography in that the are not based in reality and are idea-based representation of things. As Leticia Roncero says “screenshots didn’t quite meet the needs of this creative and growing community”. Photography are screenshots and their platform is a curator of collective screenshots. This statement completely supports Sir Roger Scruton and numerous art critic’s systemic belief that photography is not art.

A virtual world is a creative and complex architecture

Virtual photography is based in staged scenes and character build digital illustrations that are complicated and unique, with much of it hand drawn textures. A virtual world is a creative build that is not natural nor does it occur by chance, but a construction of ideas and processes. A virtual scene is the intricate collage of many digital art forms.

Will Flickr make a separate category for AI Art?

It is interesting is that Flickr has yet to make a category for AI Art which is aggressively taking over digital art online. It only is characterized by a tag (artificialintelligence). However, I see many images categorized and tagged as Virtual Photography is actually AI art.

We use cookies on our website to give you the most relevant experience by remembering your preferences and repeat visits. By clicking “Accept”, you consent to the use of ALL the cookies.
Do not sell my personal information.
Cookie SettingsAccept
Manage consent

This website uses cookies to improve your experience while you navigate through the website. Out of these, the cookies that are categorized as necessary are stored on your browser as they are essential for the working of basic functionalities of the website. We also use third-party cookies that help us analyze and understand how you use this website. These cookies will be stored in your browser only with your consent. You also have the option to opt-out of these cookies. But opting out of some of these cookies may affect your browsing experience.
Necessary Always Enabled
Necessary cookies are absolutely essential for the website to function properly. These cookies ensure basic functionalities and security features of the website, anonymously.
Functional
Functional cookies help to perform certain functionalities like sharing the content of the website on social media platforms, collect feedbacks, and other third-party features.
Performance
Performance cookies are used to understand and analyze the key performance indexes of the website which helps in delivering a better user experience for the visitors.
Analytics
Analytical cookies are used to understand how visitors interact with the website. These cookies help provide information on metrics the number of visitors, bounce rate, traffic source, etc.
Advertisement
Advertisement cookies are used to provide visitors with relevant ads and marketing campaigns. These cookies track visitors across websites and collect information to provide customized ads.
Others
Other uncategorized cookies are those that are being analyzed and have not been classified into a category as yet.
SAVE & ACCEPT
error: Content is protected !!